Ron Paul In The Barrio 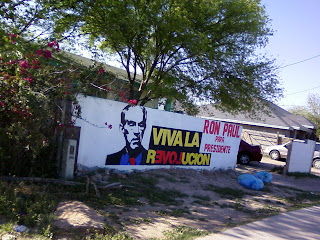 While I totally dig the art work at this Santo Nino block fence, I can't say I agree with the resident's choice of candidates.  But Ron Paul might be the obvious choice for a Laredoan looking to pick somebody from the GOP field of politicians this primary season.  For one, he's a Texan and ....... well, let's just say his names rolls off the tongue easier than Newt Gingrich's.

I get why people like Ron Paul:  he questions the established order.  He seems to make sense, until you realize his reasoning just keeps going in the other direction to inevitably contradict his other positions.  He argues for the sake of being a contrarian and not so much for actually finding solutions to problems.  The only thing missing from Ron Paul is him waving a cane during the debates.  We here at BOLAS like to incorporate the cane-waving visual into our posts, but we have to be careful with it.  At a certain point, you come across as crotchety and bitter.  No bueno.

Back to the sign.  It's interesting how this Paul supporter speaks up for the candidate in Spanish.  It's appropriate being in the barrio and all, but it stands in contrast with Mr. Paul's isolationist leanings.  It must make sense to somebody.

Enjoy your Super Tuesday.
Posted by KeyRose at 9:26 AM