Apparently our commercial bridges are at 25 percent in processing truck cargo.  Makes me wonder what all the fuss was about a fifth bridge.

To this end, I am pleased to share with you that National Journal ranked me as a centrist Member of Congress (click here for more information on vote rankings).  My stance on issues reflects the varying needs of my constituents throughout the 28th District of Texas.
Regardless of what party has been in control of the House, my moderate voting record has not changed. I look at each bill independently as I take a vote, and I will continue to place the district above any political party.

That's fine.  So why not run as an independent? 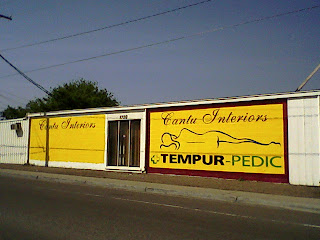 Cantu Interiors, located on Chihuahua, decided to spruce up the block with some bright colors.  I actually like the wall art.  It adds some color to an otherwise drab landscape.

But this sort of signage is not sitting well with some north side residents who have to put up with large, brightly-colored political campaign signs situated on cinder block walls.  City council may act on banning this sort of display.  That's funny because it was never a problem before.