While We Wait For The Primary 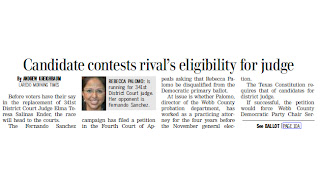 Judge Salinas-Ender's post is a highly coveted position so it makes sense that one would use everything at his/her disposal to try to win a race.  And when attorneys are involved, it's only natural that legal challenges would arise.  Like I had commented before:  I may not have much to do with which candidates wins, and their success will probably not impact me much, but it's great to watch all the manuevering -- good and bad -- that goes on to run a campaign.

In other candidate news - a valley man, Robert "Bobby" Maldonado, put his hat in the ring for constable.

He's a Desert Storm veteran, a former state trooper, and likes to speed while driving around with $1 million in his car.  I hope people won't hold that last part against him.
Posted by KeyRose at 9:07 AM