Thief On The Loose 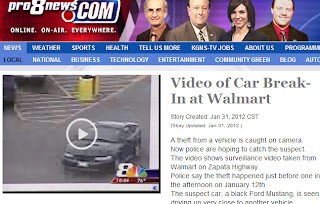 Authorities are on the lookout for a person who stole items from a car parked at the Wal-Mart on Zapata Hwy.  The suspect broke the vehicle's window to get to the loot, in broad daylight no less!
My question is:  where were all the candy apple, tamales, elote vendors that usually occupy the parking lot area?  You mean nobody was out there asking for change?  Nobody was out there selling knockoff merchandise to witness anything?

The perp shouldn't be out there for too long; the cops will eventually catch him.  An old Mustang with chrome rims and a spoiler will be easy to find.  But if that vehicle description proves difficult to find, just look for a young male wearing either an Ed Hardy, or Scarface top, talking incessantly about his favorite movie, "The Fast & The Furious."  You can probably find him at any local car wash, polishing his chrome rims, but paying no mind to his paper license plates.