They Tell Us Fracking Is Safe 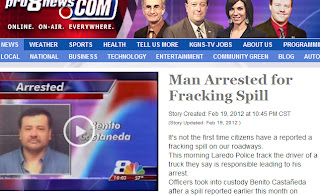 Hydraulic fracturing-related stories have been in the news lately.  Pro8news reported on the arrest of a man responsible for a sludge spill recently.  And last week the town of San Ygnacio spoke out against a proposed waste dump site.  The outcry against the site was influential enough to have TX Energy Services withdraw its application from consideration. 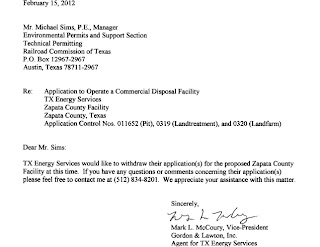 Letter sent in by blog reader

The public, myself included, has been concerned about the potential ill effects that hydraulic fracturing can have on the environment.  Members of the community have even gone before city officials to voice their worries.  But it seems like our efforts have been misguided.  There's actually nothing to worry about and all your suspicions can be eased thanks to a study conducted by the University of Texas Energy Institute.

The study proposes that hydraulic fracturing isn't so much responsible for water contamination, as are practices associated with it.  From the study:

In other words, "fracking" doesn't cause contamination of the environment; Instead it's the cement casings that fail.  And if water is being contaminated, it's because of chemical runoff from surface areas.

Mr. Keyrose, the shin splints you are experiencing are not from jogging three miles a day.  They're actually a result of the constant, alternating heel-to-toe motions you're executing over long distances every 24 hours.
And doctor, what about this study being funded by big oil?
No, no.  Big oil didn't contribute any money to this study.  They only contribute enormous amounts of money to the college.
I see.  Thank you, doctor.

While we're on the topic of doctor's visits, here's another nice little nugget from the study.

But again, remember, these adverse health effects only exist if something were to go wrong.  (See previous excerpt)

I really don't see how supporters of horizontal hydraulic fracturing can point to this UT study to reassure us that the practice is safe when the only science the study includes is explaining how benzene is also found in second hand smoke.  The science hasn't even been done.

There's still much work to be done on everybody's part.  And critics of "fracking" shouldn't be discouraged by university personnel who put out studies based on semantics.  The media didn't create this alleged hysteria.  Look to the people of San Ygnacio and you'll see how fears aren't based in perception, but on reality.
Posted by KeyRose at 11:49 AM

Email ThisBlogThis!Share to TwitterShare to FacebookShare to Pinterest
Labels: Fracking