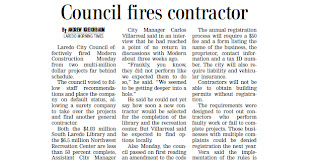 Yesterday the mayor praised the city of Laredo by calling attention to the new baseball stadium and golf course currently being built.  (You can see the mayor's statements here)  This resulted after a female Colorado transplant channeled Andy Rooney on steroids and dissed Laredo.

What the mayor left out was the fact that several facilities throughout town have yet to be finished. 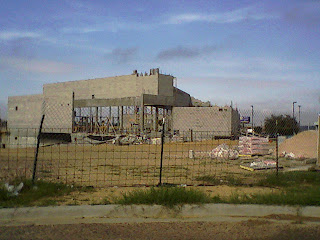 This photo is not of Mami Chulas #2, but instead, it's of the public library located at the corner of Hwy 83 and Palo Blanco.  For at least a couple of weeks I noticed that construction had stopped.  I didn't know whether the building's design was being redone, or whether the city's only forklift was out for repairs.  Lo and behold, the LMT tells us today that the construction company charged with the project has been let go.  But details are lacking.  The only thing the story tells is that sub-contractors were not being paid.

I don't want to say that city council, the mayor, and the city manager are incompetent, but their Spidey sense has been on vacation for quite some time now.  They haven't picked a winner in quite a while.
Posted by KeyRose at 10:17 AM