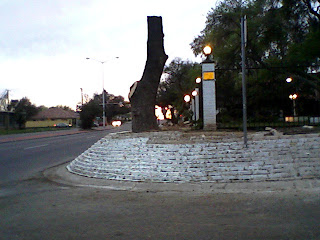 The old J.C. Martin house has undergone some remodeling in recent months.  You've probably driven by and noticed the new lighting, iron fencing, yard statues, and a still-under-construction retaining wall on the curb.  When all these additions first started, I figured somebody finally bought the famous landmark that once belonged to one of Laredo's biggest crooks, if not the biggest.  Eventually I learned that the owner was a person with access to a lot of money.  But more on that later.

I didn't really pay attention to the curb construction project until I read a comment on a Pro8news blog post.  The writer basically asked why there was no sidewalk included on the curb.  So I decided to go see for myself, and wouldn't you know it, the person was right.  Oh sure, a sidewalk could be factored in, but there would be no access to it from the corner.  Apart from that I wondered how a private citizen could remodel a section of the street that is supposed to belong to the city, i.e. us!

So I took my pictures, but as I was getting in my car, the owner of the house drove up and asked me what I needed.  And I said, yes, Mr. Javier Santos, how did the city allow this when I would probably be denied from undertaking anything like it on my curb?  And how are people supposed to walk here when there's no access to the curb?  He told me he got a permit for it, and that people don't walk around here so there was no need for pedestrian access.  According to him, the retaining wall is essential so as not to have any dirt fall on Clark Blvd.  And the trees were cut down so no branches fell on the street. 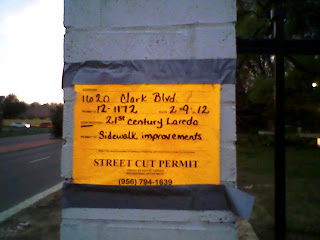 I asked him for permission to take a picture of the permit on the fence.  But quite frankly, now that I think of it, I didn't need permission since the curb doesn't belong to him.  At least it shouldn't!

Somebody gave him a permit for the construction of the wall.  But it doesn't look  like anybody is overseeing the project for needed specifications.  Where's the handicapped ramp access?  Forget that for a moment.  Where are the sidewalks for the Heights neighborhood?!  This is Clark -- one of the only roads where a person can access the far east of Laredo with the far west of Laredo.  The road has plenty of medians that could be dressed up; It could be turned into an actual feature for Laredo.  Instead it's being neglected, and the only parts that are getting attention nowadays are not up to code.

There are plenty other questions I have about this -- questions that I hope get answered.  But in the meantime, all I can do is wonder.  I'll wonder how much money I would have to have to be able to do this.