The natives went out last night to see their sons and daughters march under the lights.  The Youth Parade, which features younger groups, has the same route as Saturday's big event:  it goes down San Bernardo Ave. and then takes a right on Victoria.  We almost saw it live, but decided against it due to the weather's unpredictability.  Also, we were just tired and didn't want to go anywhere.

Thank goodness Public Access aired the parade.  The theme for the parade was Rock & Roll.  That's funny because we no longer have a rock station in Laredo.  But that didn't stop participants from dressing up in KISS costumes.  And for some reason, the Webb County contingent included an image of the Bordertown Drive-In on their float (around the 2:15 mark).  Big ups to them.

Kudos also to the two ladies on emcee duties. 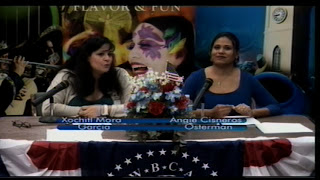