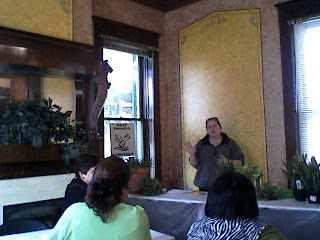 Yesterday I attended the plant clinic/swap event hosted by the St. Peter's Historic Neighborhood Association and Keep Laredo Beautiful.  It was originally going to be held at the St. Peter's Plaza, but because the morning was overcast and there was a chance for rain, it was moved indoors.  The location pictured above is half a block from the plaza.

Lynne Nava of KLB went over some plants' characteristics.  She explained how she has, over the years, exchanged cuttings from her garden with neighbors, and they too have  returned the favor.  This method of community propagation is easier on your finances, and the relationships forged through this activity she compared to the roots of a plant that take time to mature.

At the end of the session, attendees were able to take with them cuttings from the featured plants.  There was a St. Peter's resident who took several samples from her garden, including savila, to share with everybody.  I only had one little offering.  I wonder who made off with it.

In talking to my mom later in the day, she told me about how she and my grandmother would exchange plant cuttings with "Docha," an old lady that used to live far out east on Del Mar Blvd.  I have vague memories of going out to her property.  My mom's aunts and one cousin also shared plants with us.  Of course, my mom also bought things at the old Gentry's on Meadow Ave.  Perhaps it's because of all those trips to the nursery and tending to plants that I still enjoy the ritual of gardening.  Something has to explain the fact that I was the only male at the event yesterday.