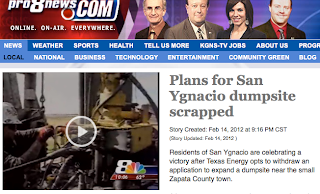 The town of San Ygnacio hosted a public forum yesterday where its citizens were invited to speak on a proposed drilling waste dump site.  In the days leading up to the meeting, people voiced their concerns about the project, saying that it had the potential to contaminate nearby waterways.  Well, the public spoke loud and clear.

When Webb County Commissioner Jaime Canales, who serves on the state's Eagle Ford Shale task force, asked the audience to indicate whether they were against the plan by raising their hands, few in the audience had their hands down.

Their reluctance to having Texas Energy Services set up a dump site for fracking sludge was brought on by their experience with a saltwater disposal site which emits a foul odor.  John Crist of T.E.S. tried to reassure the audience that precautions were taken to prevent any adverse effects on the environment and the public, but they weren't having it.

In a question-and-answer session, Crist responded to ubiquitous complaints and said he would cut the Railroad Commission's work short and pull the application from consideration.  He then left the meeting abruptly.

And so it was done.  The people of San Ygnacio pulled together and stopped big oil in its tracks.  Well, maybe not big oil, but one of its minions.

I want to hear what Rep. Richard Raymond has to say about this.  I want to see him chastise the people of San Ygnacio the way he talked down to Laredoans who had concerns about fracking in general last year.  We've seen the effects that the natural gas industry has had on our environment and it's not pretty.  We know it and our neighbors due south know it too.  I applaud the citizens of San Ygnacio.  They value their natural resources more than most around here.

Now if Raul Salinas wants to make nice with these companies, I say go right ahead.  We've got some nice land near the new baseball field, or near the new golf course, where we could store this toxic sludge.  Let's see just how committed he is to this.