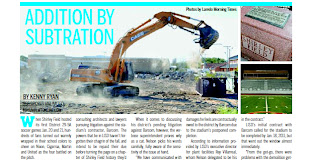 956 Sports Unlimited features a story today about the delayed opening of Shirley Field last Fall.  While I had my doubts that one certain athletic director was trying to coordinate the opening as such to have Martin H.S. be the first to play at the new stadium, the LMT story explains how several details needed to be completed before occupancy could be achieved, such as:  "Light fixtures needed to be replaced, bolts needed to be tightened, electrical revisions had to made, et cetera..."

Because of the delay, and because of contractual obligations, the contractor owes LISD money.

Just because the math adds up to $78,900, however, doesn't mean the district will be paid that amount.  Villarreal was quick to caution LISD is almost certain to receive less than that in negotiations Nelson hopes will be settled outside court.

Rey Villarreal is LISD's Executive Director for Plant Facilities.  If you're curious, see this video.

Now, even though Shirley's progress was initially hamperd by contaminated soil that needed to be hauled away, construction delays are a common thing in the Gateway City.  The Slaughter Park in my neighborhood took years before opening; And that place is mostly soccer, and baseball fields.  The Haynes Recreational Center along Clark Blvd. took a while to be completed.  I don't even want to mention the proposed Chacon Creek Hike and Bike Trail.  And the construction of the library on Zapata Hwy seems to have come to a standstill.  But now we learn -- thanks to a blog reader -- that the baseball stadium that is currently under construction had a bit of a delay from the beginning. 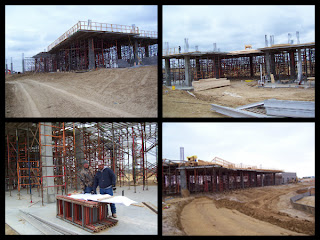 Leyendecker Construction, Inc. is based in Laredo and is a strong supporter of the community. When they looked at the job they agreed the money was tight and the schedule was short but Laredo deserved the stadium and the community needed the project and the team. The project was five months behind schedule when the first spade of dirt was turned. There have been problems with schedules, equipment, etc. but the young ball players in Laredo are not worried, Leyendecker will see to it that the first pitch is thrown May of 2012.

Weather can't possibly be a factor in putting things together in Laredo because the climate usually works in our favor, especially recently with the drought we've been having.  As a local, it's frustrating to hear that things are coming our way and then we have to wait.....and wait....and wait.

I realize Laredo is a sleepy little town, but at some point, things need to move along a little faster.