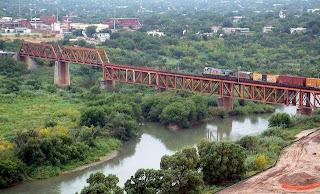 Times are good for Kansas City Southern, and Laredo for that matter.

Cross-border merchandise trade totaled $341 billion by the end of September, about 18 percent higher than it was at the same point in 2010, according to the most recent data from the Bureau of Transportation Statistics in Washington. The increase will help Kansas City Southern, the only U.S. railroad with a wholly owned Mexican subsidiary, weather the effects of a possible European recession as the 125-year-old company seeks to take business away from trucks traversing the border.

The fact that they block traffic near the downtown area is a minor inconvenience.