Congratulations To The Denver Broncos 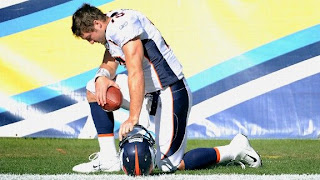 The Denver Broncos defeated my team, the Pittsburgh Steelers, yesterday in a stunner of a Wild Card playoff game.  Thankfully all the Pitt players can now go nurse their injuries.  The Broncos, on the other hand, will have a short week as they meet the Patriots this Saturday.

Even though the sting hasn't quite subsided, I'll definitely be watching the rest of the playoffs to see what becomes of the Houston Texans, the Giants, and the three offensive powerhouses: the Packers, Saints, and Patriots.

But for now I want to turn my attention to all this business of overt displays of faith in football.  Many players have worn their religiosity on their sleeve but Tim Tebow (above) has taken it to a whole 'nother level.  Not only does he thank the Lord during press conferences, he's been known to wear a worn-out biblical verse reference on his eye black.  There are worse things that Tebow could be doing, but what does his faith mean when other players profess their Christianity during regulation? 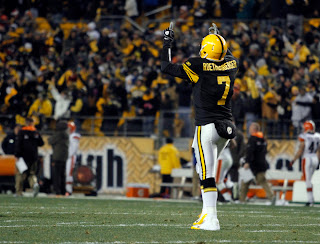 Ben Roethlisberger always points up when his team scores.  That's a nod to a higher power, no?  And Troy Polamalu subtly crosses himself multiple times during a game.  I get that these players are grateful for the gifts that have been bestowed upon them, but how does all this fit into a game of football?  I never hear a player thanking God for a loss, or for the opportunity to play his heart out.

I don't begrudge anybody for his or her outward display of faith.  It just seems odd that God would be flip flopping during a game, letting one team score one minute, and then rewarding another the next.
Posted by KeyRose at 1:28 PM