After police officers were found to have been harrassing Hispanic immigrants in East Haven, CT, the mayor was asked to respond to the charges.  Mayor Joseph Maturo:

"I might have tacos when I go home.  I'm not quite sure yet."

People were upset by the mayor's insensitivy, while others didn't see what the big deal was about.  Those who made light of this situation missed the bigger issue in that immigrants were being taken advantage of by those in power.  The off-hand remark made by Mr. Maturo could've been blown off if police officers weren't abusing their power.

Reform Immigration for America sprang into action by delivering the mayor a ton of tacos. 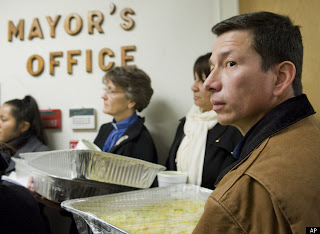 It's not exactly reassuring to know that other communities also have a numbskull for a mayor, but it's good that he's being called out on his behavior.
Posted by KeyRose at 9:10 AM