Booze It Up, Laredo

Being the son of an elected official and being caught driving while intoxicated is not the most ideal of circumstances.  It's pretty dumb when you consider that, on top of all that, Mr. Mario Aurelio Cuellar-Castillo is not even of legal drinking age.  The end of the world for the Cuellars, I mean Castillos, it's not, but it's certainly embarrassing.

The only comfort here is that Mario didn't hurt himself or others.

I understand why he did it since my friends and I would do the same thing back in the day.  It used to be so easy -- we would just hop on over to Nuevo Laredo to get our buzz on.  Nowadays, there must be other ways to score alcohol.  For instance, a teenager could just walk in to a locally-owned tiendita in the barrio and walk out with a case of beer, no questions asked.  I'm just thinking out loud here;  I really don't know if this is what actually happens.

But driving while intoxicated is a serious problem.  And you know it's bad when the locals call out our public officials for doing it.  Check out the comments that Rosie Gregory Castilleja sent in to the Op/Ed page of the LMT Sunday. 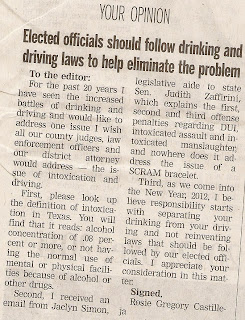 Mario Castillo messed up here but I'm not going to hold it against his parents.  I would if I knew them better.  For now, this is just another story of a drunk driver that makes for sensational news because of his family connection. 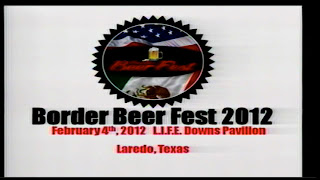