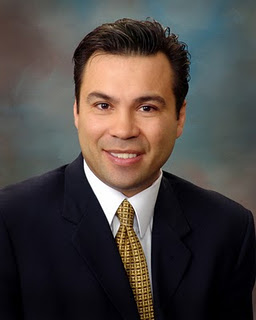 With the latest developments in the race for Webb County Sheriff, I thought about selecting Rick Flores (again) to be LaSanbe's 'Person of the Year.'  [But since Rick hasn't been here the whole year, he can't be Person of the Year]  His stumbling into a rematch with incumbent Martin Cuellar has definitely been newsworthy, not to mention blogworthy.  But he might not have another go at it because he hasn't been a resident of Texas for one year prior to filing for office.  His story we'll leave for another day.

Instead, this year's honor will go to Abraham Martinez, former hospital administrator of Laredo Medical Center.

Martinez made news two years ago when he was accused of accepting bribes in return for awarding contracts to physicians.  He transferred to a Central Texas hospital even though no wrongdoing was discovered on his part after an internal investigation.  His story may not have registered on most people's radars, especially since the media coverage was scant, to say the least.  But the saga was definitely of interest to the medical community.  His newfound notoriety became known all the way in North Texas as he worked for yet another institution after allegations became public.

Martinez maintained his innocence.  Yet his charges didn't seem so far fetched.  How can we forget the bribery charges that fell upon members of the Laredo Police Department, including the chief of police, not too long ago?  But to hear the details of Martinez' actions -- that he allegedly interrupted a surgical procedure to remind a doctor of his scheduled kickback -- I was a bit skeptical.  Nevertheless, I do believe there was enough evidence of professional misconduct at hand.  And the truth now is that he is serving time in prison for tax evasion and conspiracy charges.

For a city inundated with news stories about petty crimes, and cartel-related drug activity, a white collar crime sure came as a surprise.  And, of course, the back story was all too impressive.

We may not have heard the last of Abe Martinez.  His story makes for compelling discourse, even if it's within a small circle of people in Laredo.  And I would be remiss in leaving out those who helped carry out his scheme, but if you're going to shake down a couple of doctors, no mid-level employee would be able to pull it off.  There were other lowly players involved, but the scale of this case took just the right person to see it through:  one with enough know-how, experience, and greed to shake the foundation of Laredo's largest hospital.

On paper, Martinez looked like the real deal.  He had big ambitions, and learned how to get to the top.  But in the end he turned out to be just another pencil-necked geek with a big chip on his shoulder.  He went for it all and got busted in the process.  And for that, he's LaSanbe's 'Person of the Year 2011.'  Congratulations, Abe.

LaSanbe's Piper Maru contributed to this post
Posted by KeyRose at 10:11 PM