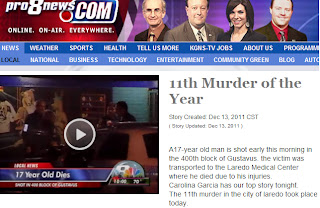 The 11th murder of 2011 occurred late Monday night.  As I passed by the Quarter House last night (Tuesday), I saw that the place was open, with several cars in the parking lot.  I found that odd.  I would think that if your establishment had been the site of a murder, you'd close up shop for a day or two; If not for peace of mind, then out of respect for the deceased.

But this story just begs more questions.  Take for instance the fact that a 17-year-old was in a pool hall on a school night.  Then, straight out of a movie, after he's shot he's transported to the hospital in a private car.  And when the police find out that it happened at the bar, they had to break in themselves, because the place was closed!

Officers forced themselves into the building under exigent circumstances and found several casings.

And of course, in typical Laredo fashion, there are no suspects and authorities are looking to the public to help them solve this case.  Hey, here's an idea, how 'bout taking in the bar owner, or bar attendant for obstruction of justice?

The community just experienced one of the most tragic events this year in having a mother kill her two kids and then herself.  In some ways, this new story is similar.  A teenager is dead.  It could've been prevented.  But for some reason, he was allowed to be in a pool hall, late at night.  A fail on so many levels.