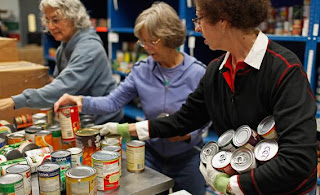 I've tried to keep it simple when donating canned goods before, but.....

A lot of waste also occurs on the other side of the food-donation equation. Rosqueta observes that a surprisingly large proportion of food—as much as 50 percent—provided to needy families in basic boxes winds up going uneaten.

Mission: Give Laredo will be taking place this Saturday (8 a.m. to 8 p.m.) and Sunday (10 a.m. to 5 p.m.) at 6001 San Dario.  Organizers are asking the public to donate clothing, furniture, canned goods, and blankets.

This could serve as a productive outlet for those who are still struggling with the thought of having a mother and her two children living in poor conditions, and ultimately, meeting their untimely death.  To honor their memory, we could go out and give to this worthy cause.  My wife told me about some furniture that she wanted to donate, so I'll be out there to show my support.
Posted by KeyRose at 9:19 AM