Recently I took a jab at Mayor Salinas' penchant for wearing (cowboy) hats, especially indoors.  A reader took issue with my post, saying that Salinas has done a lot for Laredo, and that I should direct my attention to Henry Cuellar and President Obama instead, who both have done less, supposedly.

I brought up the fact that Obama has done his part in bringing troops home from Iraq.  In the comments section from a post yesterday, Anonymous submitted a link to a story about troops being diverted from Iraq to Afghanistan.

Atlanta (CNN) -- Soldiers who just returned from Iraq are among several thousand being ordered to Afghanistan in six months as part of a mission designed to beef up Afghan forces ahead of a planned 2014 U.S. military withdrawal, officials said.

Key words in that snippet are "several thousand" and "planned 2014 U.S. military withdrawal."

Luckily for the troops coming home from Iraq, they get to spend the holidays with family and friends.  But for some it means that they have to go back to a different part of the Middle East.  However, I think we should take a look at the numbers of men and women serving our country.  Troops are in fact being sent to Afghanistan, but the numbers there have leveled off; And Iraq has seen a significant drawdown since Obama took office.  Via a Congressional Research Service report: 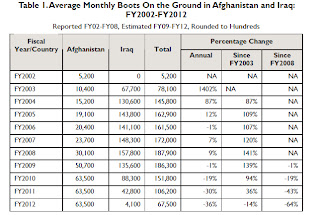 The timing of the troop withdrawal is debatable.  However, I really think this move is way overdue, and Obama has followed up on his campaign promise.

I welcome any criticism of President Obama and his policies, and I most certainly welcome any criticism of Henry Cuellar.  But to laud Mayor Salinas over Obama is misguided and hollow.  Let me know how Raul Salinas has been good for this city, and I'll take it under consideration.  But let's not downplay what has just happened here with the troops.
Posted by KeyRose at 10:48 AM