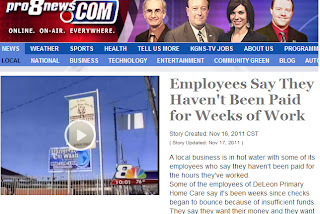 Laredo has to be stuck in some kind of time warp to operate the way it does.

We found only one woman in the crowd who received a partial payment. She got some dollar bills and several rolls of coins but most were given a few boxes of chocolates and sent on their way.

Don't get me wrong, I like chocolates.  But the thing I like more than chocolate is the sound of money being directly deposited into my account at midnight on assigned Fridays.  Actually the direct deposit doesn't make a sound because there's nobody around to hear it.  But I digress.

I don't know.  If I was given a roll of coins and chocolates in exchange for work, I might be encouraged to slap somebody.  And that's OK because that's what happens in bizarro world.  In that world, it's common for people to suggest paying a doctor with chickens in exchange for a physical.

Now excuse me while I go stand on my head and bark like a dog.