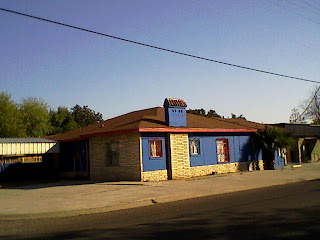 The facility pictured above is located at the corner of Musser and Seymour Ave.  Recently, it was painted, and a small playground was added in hopes that it could be turned into a daycare center.  But area residents were not happy with the plan.

Their contention was that the business would not be in keeping with the neighborhood's zoning.  But if that's the case, how do you explain the fact that the office space next to the corner house used to be a doctor's office?  Currently the olive-colored office space to the right has a sign on the wall that reads 'Acupuncture.'  Heaven knows if it's a nuisance to residents.

I understand how the business would not be allowed to operate given the area's zoning.  But there's a child care center, and a Pronto convenience store one block away.  And in other parts of the Heights barrio, I know of at least two other daycare centers.

The conditional use permit request for the daycare was denied by city staff, but only because a group of residents spoke out, I believe.  If they hadn't shown up, the daycare would've been open today.  And that's fine.  If more people took part in the political process, this city might be better off.  But I don't buy the residents' take that the daycare would disturb the land use pattern of the surrounding properties, another point, among several, in their protest.