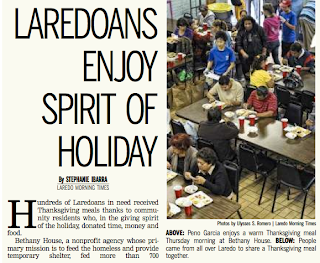 Kudos to Bethany House for opening its doors on Thanksgiving to feed the less fortunate.  And I was informed that at least one of my Facebook friends was out there helping out, so big ups to everyone involved.

Big thumbs down to HEB for opening its stores yesterday.  I have a couple of in-laws who work for the company, and it would've been a total shame if it wasn't for the stories one of them shares.

Supposedly one store (in north Laredo) was bulging at the seams with customers.  Peoples' carts were overflowing with groceries and all the checkout lines were jammed.  One particular customer had two grocery carts packed with stuff.  After everything was scanned, and her cost tallied, she remarked, "Oh, I forgot the turkey!"  This little oversight caused the other customers to scream bloody murder because she apparently was holding up the line even more.  Security had to be called in to quell any run-ins.

The lady was eventually advised to pay for her groceries and get back in line for the turkey.  Security had to be called back for other infringements.

Never a dull HEB story from my brother-in-law.

Today, I'm staying away from any shopping centers.  I'll stay close to home to work on things I've been putting off.