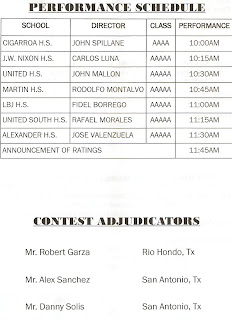 All the Laredo bands competed in the yearly UIL marching contest this past Saturday.  But instead of traveling to Alice -- or Robstown as in my case back in the day -- everybody performed at the new Shirley Field Sports Complex.  Por favor.  I got word that it was done in order to save money on travel.

Anyway, all the bands got a good rating, except two:  Martin and Cigarroa.  I didn't get to see them perform so I can't comment on their show.  But one source told me that 28 Martin band members failed a class or several, so that precluded them from participating.  As a result, you could see large holes in the band's formations on the field.  Not a good day for the once mighty "Banda del Animo."

As far as Cigarroa, I'm not sure.  The only thing I heard is that there was a mixup with them setting up at the beginning.  The judges instructed them to clear the field, before playing anything, and come back to do it all over again.

Things have changed over the years:  LISD band member numbers have dropped; Marathon practice sessions are a thing of the past due to UIL rules; Budgets are keeping bands from traveling; etc.

Hopefully my alma mater's band can get their mojo back someday, if for nothing else than to just bring some good news their way, as well as the school's.
Posted by KeyRose at 10:57 AM