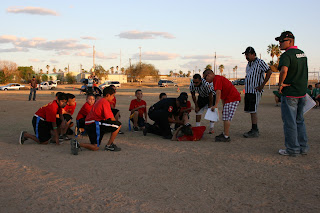 Flag football play resumed yesterday at the fields along East Calton Rd.  In one match, a player took a tumble so severe that it required first aid care.  Thankfully an EMS unit was standing by at the scene.

In talking to the Parks and Leisure Dept. Director, Valdi Guzman, I learned that the fields are property of the airport.  "The city technically owns the property, but it's owned by the airport," he said.  Improvements to the fields have been suggested, but city staff has advised against it because the airport could, at any time, sell the land.

At one point, city crews used a grater to try to get rid of the rocks from the playing surface.  But in doing that, more rocks surfaced.  Mr. Guzman said that the city is currently looking into opening new playing fields north of this area.  In the meantime, these students will have to make do with what they have.  It's just too bad that they have to pay $250 for a chance to play on dirt and rocks.