Spillover, But Not That Kind 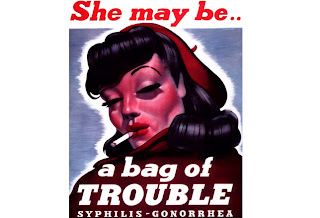 Slate has a pretty interesting -- and scary for that matter -- story about the possibility of Gonorrhea eventually being resistant to all antibiotics available today.
In the past, the disease was treated with Penicillin, but Gonorrhea figured out a way to get around it, so to speak.  Now it seems to be doing the same with the last antibiotic out there to combat it.

Now, before you start thinking that I may have some sort of personal experience with The Clap, stop right there.  This muchacho has never had to deal with any drip.  The reason I felt like posting about this is because of the way it was addressed in the past.  Just take a look at the picture above to see what I mean.  The slide show that Slate provided of old anti-gonorrhea campaign posters pretty much tells me that the disease(s) was given a feminine face, as if men weren't culprits in spreading the bacteria.  I laugh at their (posters) absurdity but also lament that they're so derogatory towards women.

Anyway, I wonder if the City of Laredo would ever use this sort of message to warm the public of the perils of Gonorrhea.  It would be a trip to see something like it on billboards, or on public access television.  But things would have to be drastic, I guess, in order for that to happen.  I don't think we're at that point yet. 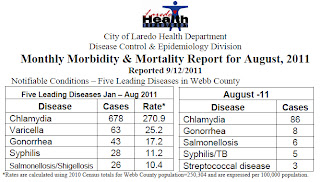 A 2003 UT Health Science Center study found that infection rates along the border were lower than the state average.  One explanation for it was the public's ability to purchase antibiotics in Mexico without a prescription. 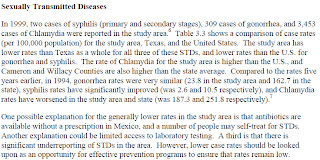 But now that people are staying away from Nuevo Laredo, it makes sense that we should eventually see a rise in the severity, and number of sexually transmitted diseases.  Add to that the fact that Planned Parenthood centers in Texas are being defunded so much so that they have no choice but to close.  Poor people will not have that access to primary care, and thus, the statistics will change for the worse.

Life on the border has its drawbacks.  Pretty soon we might see it become more difficult.  Whether we'll ever see a funny, albeit sexist, Gonorrhea campaign in Laredo like in the past remains to be seen.

Stay healthy, my friends.
Posted by KeyRose at 3:09 PM