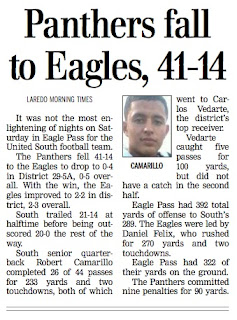 Normally I wouldn't care about high school football scores but this one is interesting.  You see, Eagle Pass is playing Martin H.S. in the first contest ever at the new Shirley Field Stadium this coming Thursday.

Eagle Pass has been doing pretty well, and it pains me to say this -- NOT! -- but I hope they do really well on Thursday.  Not because the Tigers deserve it, but because I have a hunch that all these Shirley Field construction delays were set up so Martin could be the first team to play at the new site.

It sounds trivial, and for the powers that be to work it that way would be ludicrous; But it's really interesting how this all developed.  First the field was going to be ready for week 3 at which Martin was going to play.  Now, miraculously, it's ready for this coming Thursday and Martin is the lucky LISD team to christen Shirley.  Again, it sounds trivial, but some people out there think that it's Martin's right to play there first.

Get ready Laredo.  Shirley Field is going to open and the first game to go down in history may be a letdown.