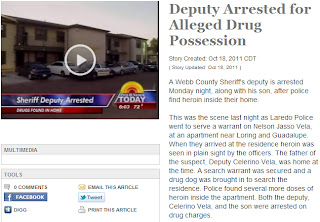 On Sunday I was at a loss for what to do with my time since Breaking Bad had its season finale the weekend before.  For those who don't know about the AMC series, it's based on the life of a chemistry teacher who is diagnosed with cancer, and resorts to cooking and selling meth to provide some sort of financial security for his family.  Bryan Cranston's character is resourceful in avoiding the authorities, a trait that surely wasn't inspired by Laredo's own dealers.

KGNS reported on a father and son drug-pushing team that was caught at a location walking distance to my house.  More importantly, or perhaps I should say more shamefully, is the fact that the son had been caught recently with another load of drugs.  Apparently, 'one the job training' doesn't apply here as this ne'erdowell doesn't seem to be picking up on past mistakes.

But the capper has to be the fact that the father in question is a deputy with the sheriff's department -- Another blow to local law enforcement's image.

This little tidbit is not the end of Sheriff Martin Cuellar, but I'm sure his opponent, Rick Flores, is enjoying this new development.  Although, it may turn out that Celerino Vela is a holdover from the previous administration (Rick's), in which case, both candidates would be running away from the news story.

Whatever the case, it's not a good thing for Laredo.  But it makes a good story for Bordertown: Laredo.