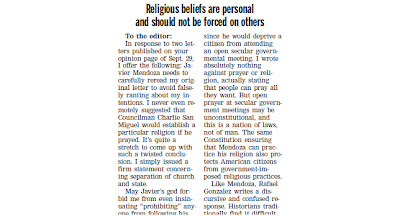 The praying-at-city-hall-before-every-council-meeting debate keeps chugging along.  Some think prayer at city hall is a good idea and others would rather have none of it.

I was going to do a podcast on the subject last weekend since public debate continued in the pages of the LMT, but decided against it since the majority of city council had reservations about prayer.

Yet here we are a month later and the subject is still being discussed.  Perhaps it was a good thing that council decided against having prayer before the start of city business.  The subject has set off a lot of people.  The animosity might be great for blog material and it might keep us entertained but it doesn't serve the community if it's going to divide us deeply.

Charlie San Miguel's heart might've been in the right place by suggesting prayer to begin with.  But he was a bit too hasty in thinking that everybody would be on the same page.

Faith is a popular concept but it's not for everybody, and not everybody has the same view of it. 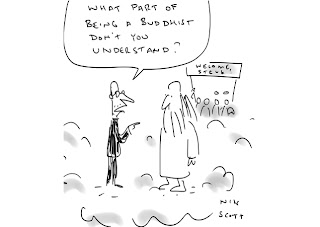