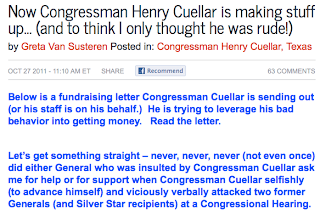 On her blog, Fox News personality Greta Van Susteren posted, and took issue with, a supposed letter written by the finance assistant from "Texans for Henry Cuellar."  The letter was allegedly sent out to supporters to raise funds for Cuellar after Susteren called out the congressman for a heated debate he had with two generals.

The Fox employee now thinks Cuellar is rude and a liar with what is now being said in the mailer.  Van Susteren picked up on the fundraising letter from a piece that appeared in the Rio Grande Guardian nine days ago. 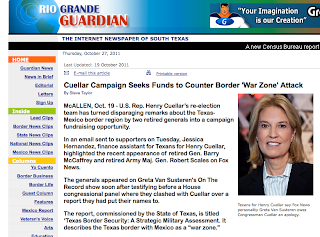 My problem with this is that neither Greta, nor Mr. Taylor from the Guardian, post any proof of the actual letter.  I would expect the RGG to give us an example of the writing since it's an online publication, but no dice.

This supposed "Texans for Henry Cuellar" letter may all be on the up and up, but I'm a little suspicious since I can't find anything on the Cuellar support group, or anything on Ms. Jessica Hernandez, the finance assistant.

I emailed Mr. Taylor so he can shed some light on the origins of the letter.  Again, this all may be legit, but for now, I have my doubts, especially given that Greta's blog post is pretty lame.