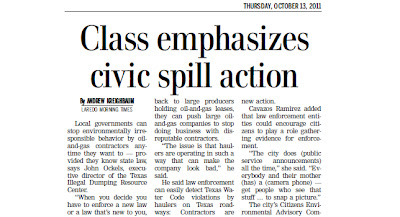 Local law enforcement officials got up to speed on laws concerning the transportation and disposal of hazardous waste.  The Laredo Energy Arena, fittingly enough, hosted two days of sessions aimed at preparing our first responders to deal with those who don't hold the highest regard for our environment, namely truck drivers that haul sludge from oil and gas drilling sites in northern Webb County.

We know of at least one incident where a truck driver was stopped for spilling hazardous waste near downtown.  So the locals have been on top of this for some time now.  But the companies that produce this waste in the first place should get cited too, but seeing as how our leaders are always gushing over those who are doing the drilling, I don't see that happening.

Webb County Attorney Anna Cavazos Ramirez had this to offer the LMT writer:

"The city does (public service announcements) all the time," she said.  "Everybody and their mother (has) a (camera phone) - get people who see that stuff ... to snap a picture."

Nice.  My mother, by the way, does not have a camera phone.  She's had two in the past but has managed to lose 'em.  But I digress.

Ms. County Attorney, of course, is encouraging us all to do our part in bringing violators to justice, because law enforcement can't do it all on their own.  I did just that today, but thankfully a deputy was right along to stop the spillage in its tracks. 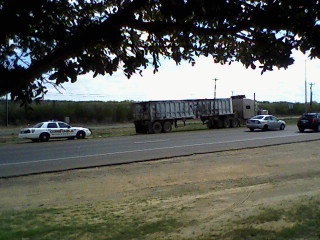 The trailer seemed to have some sort of thin cover on top, but the sludge was spilling through an opening right above the rear license plate.  The left side mud flap was covered in the material.  When I came up on the trailer, I could see that it was leaving a thin trail of sludge on the road, and the smell of diesel was pretty obvious.

Kudos to the officer who made the stop this afternoon (in front of the Whataburger on South Hwy 83).  Thank you for helping keep our roads clean and safe.