Henry Cuellar may be a smart person but sometimes he speaks without thinking.  And in the video below, I'm more embarrassed by his warbled speech than from his condescending tone.


A little tact would've sufficed in speaking to a couple of revered generals, but in Cuellar's defense, the report they put forth should, by all means, be questioned.  Here's a passage from that report. 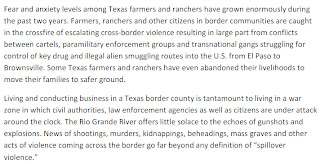 The problem with the report is that a lot of the information is conflated.  No distinction is made by what is actually happening on either side of the border.  And the use of militaristic terms, such as 'war,' 'insurgents,' and 'narco-terrorists,' is likely done to heighten awareness of this issue.  I guess that the drawback of having a report written by two military veterans.

I agree that resources should keep flowing to local, state, and federal law enforcement agencies to combat the drug trade, but let's not paint this area as some combat zone when we all go on about our daily business without fear of being mowed down by supposed spillover violence.

Henry Cuellar, and the generals need to choose their words more carefully.

Nevertheless, I would give the report an F.
Posted by KeyRose at 2:03 PM