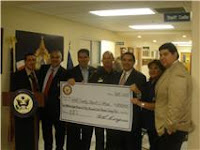 “As a border Congressman and a member of the U.S. House Committee on Homeland Security, seeing that border communities receive Operation Stonegarden funds, which are appropriated by Congress, is a top priority of mine,” Congressman Cuellar said. “The large fund amount which Sheriff Cuellar is to allocate will greatly benefit communities in Webb County by supporting and improving law enforcement coordination so that our borders remain secure.”
Henry Cuellar took a moment from his busy schedule to campaign, take part in a photo op, prove his fiscal conservativeness, show that we must all sacrifice in these tough times, show some humility, show that he's working very hard for Webb County and Laredo.
Sheriff Cuellar will now have $2.8 million burning a hole in his pocket.  What purchases will we see come next?  Jet packs?  I have to wonder:  what would Rick Flores spend it on if he were still sheriff?
(Picture and quote courtesy of the Cuellar camp)
Posted by KeyRose at 12:49 PM