This One Has Legs 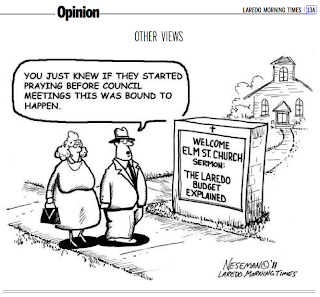 Councilman Charlie San Miguel has certainly made a name for himself quick, but not for the better.  Ever since he proposed the idea of praying at the start of council meetings, he was met with opposition and disdain.  Several of his colleagues suggested a moment of silence instead of a prayer, but he kept pushing the issue, wanting prayer to become a part of city business.  The whole thing might just go away, but now San Miguel has become a punchline.