The Natives Of Laredo

This summer has definitely been one of the hottest I can remember.  And it has set a record for having the most consecutive days with temperatures reaching 100 degrees or more.  Nice.
Thankfully we have some native plants and trees that can take the heat. 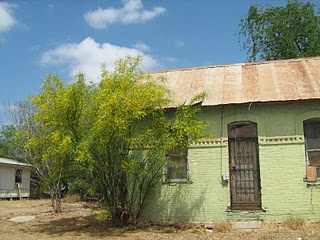 The picture above was taken back in 2008, but I used it here because the Palo Verde tree is one of those hardy specimens that can thrive in our environment.  Whether or not people want to make it a part of their own landscape is another thing.  You'll definitely see it in the barrio, but in north Laredo, I'm not so sure.

If summers do anything for me it's that they help me re-commit to native plants, shrubs and trees.  I learn to appreciate the value of oleanders, cenizos, and bougainvilleas all over again.  Some of my plants are visibly stressed.  I've already noticed that some of my younger plants have died altogether, but I'm hoping they all won't be a total loss.

Houston has taken notice of the effect the heat has had on its trees.  I don't know if there's anyone here to take a tally of sorts to see how the drought has affected our landscape.
One thing's for sure:  the three or four blocks just north of bridge 2 have taken a serious beating.  There's practically no grass anymore and a lot of trees need to come down.  It's the perfect time to rethink our landscaping options.