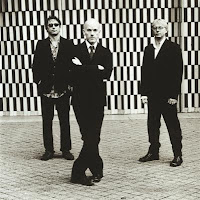 I yelled "NO!" yesterday as I was watching NBC Nightly News. Brian Williams started to announce "the end of an era" as pictures of Michael Stipe, Peter Buck, and Mike Mills floated in the background. I thought for a split second that one of them had died! In actuality R.E.M, one of the original alternative American rock bands, had decided to call it quits after 30 years!
I'll admit I wouldn't call myself a die-hard R.E.M. fan. But the more I thought about it, the more I realized I know a lot of their music. There are so many of R.E.M.'s songs that I love, and Michael's Stipe's voice is like no other.
R.E.M., whose original lineup included drummer Bill Berry, were college radio sweethearts from the get-go. I remember watching their videos on MTV's 120 Minutes alternative show and post modern countdowns. I remember songs like "Radio Free Europe," "So. Central Rain," "Daysleeper," and "Nightswimming." They had some early mainstream success with "The One I Love" and the tongue-twister "It's the End of the World as We Know It."
They reached high mainstream popularity with the track "Losing My Religion" from their album "Out of Time." The strange but eye-catching video for that song was MTV's Video of the Year in 1991. The video for the song "Everybody Hurts" from 1992's "Automatic for the People" was filmed on the highways of San Antonio.
1988's "Green" was the first R.E.M. album I bought for myself, in cassette form! I remember absorbing that entire album, hearing every detail of each song. My nieces and nephews would dance along to the videos for "Stand" and "Pop Song '89." My favorite from that first album I bought was "Orange Crush," which still sounds great today.
Posted by KeyRose at 7:46 PM