Never Leave Home Without It

Loop 1604 in San Antonio got some improvements, thanks to federal stimulus funds.  Naturally our very own Henry Cuellar made an appearance, and he didn't forget to take his House of Representatives hall pass seal to make the visit official.  A person of his stature would never be caught dead without his symbolic credentials.

Politicians are a crazy bunch.  They like to throw their weight around any chance they get.  They like to make speeches for crowds with the use of podiums and silly emblems.  We're supposed to marvel at that, or at least Henry thinks so.  But don't ever deny them the chance to speak, because they'll remember and it'll cost you when you least expect it. 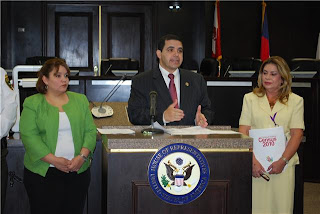