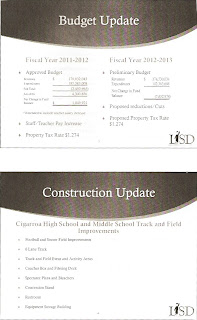 LISD officials held town hall meetings at three different sites this evening.  I was surprised to see Dr. Nelson at the Cigarroa Middle School library.  He went over attendance issues, the dress code, and the new STAAR Assessment test, among other things.

Attendance by parents was poor considering the meeting location served all those in south LISD.  Those who did make it out tonight focused too much on the dress code, I think.  Also, it was brought up how teachers are sometimes not available during progress report nights.  And at the end of the meeting, parents voiced their concerns over supposed tutorial services offered to the community by some shady characters.  Apparently there are people out there offering cell phones, and laptops to parents as part of some tutoring program.  This is the first I hear about this, but it sounded like this has been going on for a while now.

The big announcement that was made was that Shirley Field should host its first game of the season a week from tomorrow.  It wasn't mentioned who plays, but I'm sure there'll be a good turnout.