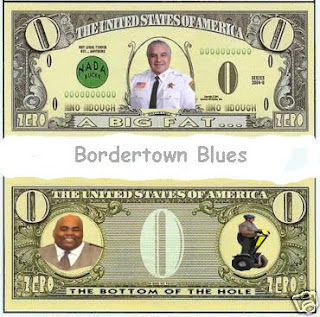 Using fake money (coupons) to motivate local students is cute, but I wonder if the sheriff got the idea from H*E*B stores, or from "The Office."


The fact that Dwight Schrute prints his own money to reward employees and says, "There's a new sheriff here in these offices, and his name is me," gives me the impression that Sheriff Martin Cuellar is an "Office" fan.

In last night's season premier of the show, newcomer James Spader assigned all the employees a spot on two lists, winners and losers.  Could Cuellar be working on his own lists?