It would surely be interesting to live your life according to what the Bible suggests, especially for women.

The Bible includes hundreds of rules for women, both explicit and implied, Old Testament and New. Women should dress modestly (1 Peter), submit to their husbands (Ephesians), and remove themselves from their communities while menstruating (Leviticus). The project is often funny—growing her hair out all year, as suggested in 1 Corinthians, has clearly been driving Evans crazy—but it has a point: All Christians pick and choose the parts of the Bible that suit them. The believers who emphasize the verse in which Paul says, "Women should remain silent in the churches," tend to dismiss the verse just a few chapters away in which he writes that "every woman who prays or prophesies with her head uncovered dishonors her head" as culturally specific. As Evans points out, it's "Biblical" for a man to take multiple wives, or for a father to sell his daughter to pay off debts.

I highlighted that part towards the end because I never knew why women wore veils to church.  And here I'm referring to the older generations.  You'd be hard pressed to find any young women wearing veils to Sunday service. 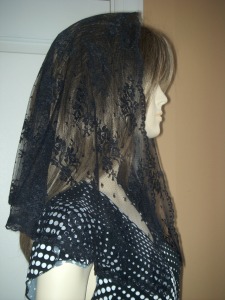 Please excuse the picture I've included.  It looks a little creepy but it's the only one I could find on such short notice.

One explanation for the use of a veil is that the head of a woman is man, and by using a veil, the woman expressed that she was "under the authority of her husband."  I don't know how that makes sense since in rock-paper-scissors it would mean the total opposite.  But I digress.

Over time, a woman's hair has come to take the place of the veil.  As long as women have hair to cover their head, it's seen as a sign of respect towards the church.  There must've been a lot of bald women back in the day for this to be handed down to the masses.

A wedding veil was used for different reasons, none of which apply to today's culture.

Tune in next week when we'll discuss the inappropriate act of wearing a Cowboys' jersey to mass.