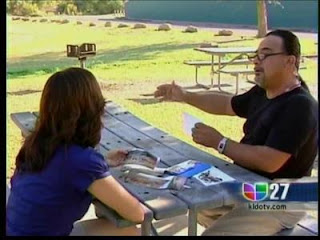 KLDO had the story of Oscar Gonzalez on their broadcast last night.  Apparently he was employed by the city as a groundskeeper.  Last week he was suddenly let go without any explanation.  He tried contacting his supervisors to no avail.

Apart from being given the runaround, he told the reporter that city staff was dumping trash and branches along the Chacon Creek.  Little feedback was provided from one city staff member who was interviewed.
KLDO will follow up on this story, and I as well.

When I took part in the Chacon Trail hike some weeks ago, I did notice a lot of branches piled up at different points of the route.  Trash and tires were littered in the creek.  It'll be interesting to find out what explanation the city gives for this development.  I only hope they're more than forthcoming with details when the Univision affiliate comes knocking.