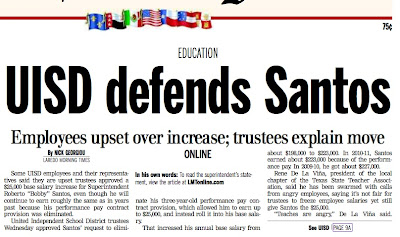 No matter how the board or Mr. Santos spin this, it's still a salary increase.

OK, so the board assumes that Mr. Santos would perform consistently as he has, so they just went ahead and gave him the extra $25 because the performance provision was eliminated.  And that extra money was already factored in to the budget so what the hell?

"What the board of trustees approved was that I continue to earn the same salary that I received last school year.  In essence, I did not receive a pay increase."

So your base salary was $223,000?
I really don't have a dog in this race since I don't pay UISD taxes.  I'm just amazed at the casual attitude taken by the board and the super.