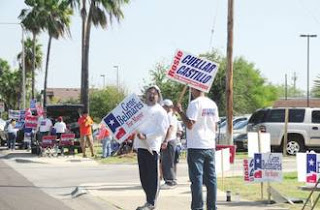 El Manana reported yesterday on the challenges some elected officials will face early next year (March 6).

The race that I expect to be crazy is the one between Frank Sciaraffa and Louis Bruni.  Bruni is looking to unseat the commissioner for some reason.  I'm sure Mr. Bruni will list for us all of Frank's shortcomings, and he'll do it in the most theatrical of ways.
The debate, where Frank won't bother to show up, should be something.  Although I don't think it will be carried out if there's only one candidate up there.

El Manana is also reporting that Commissioner Jerry Garza may be looking to run for state office all because of the new redistricting map.  (I can't find a map that shows Webb being divided)  If that happens, John Galo may seek his county seat.

And the other race that might be of interest is the one where Abraham Diaz, and James Roycroft are looking to knock out Rudy Rodriguez.  Each campaign will probably be tame.  Still, a jab or two will most definitely be thrown out given Diaz's past and Rodriguez's connection with one of his subordinates being nabbed for taking bribes.