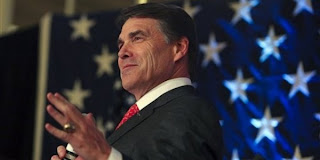 It's going to be nauseating how much press Rick Perry is going to get in the coming months.  But the sad part is that people won't really learn much about his track record as Texas governor.  The proof will come when Pro8news interviews the locals again and they won't be able to give one good reason why Perry should be elected president.

There will be those who'll love him, and those who'll be extremely cautious of him.  Me?  I don't want to say he's a male bimbo, but I don't see how he's smarter than George W.  Seriously, if this guy wins the nomination, it'll be because people are tired of Mitt Romney, and they'll fall in love with his hair.

A lot of Texans will line up behind him, and supporters will tout Texas' balanced budget approach, and he'll be called a straight shooter, and yadda yadda yadda.  However, I don't know if Perry is prepared to take hits from teachers, students, colleges, and universities who are dealing with massive cuts.  He'll repeat his supposed jobs creation successes and the state's economy, but the little matter of a budget deficit will certainly dog him.

I think Perry's got a lot of guts entering this race seeing as how people haven't forgotten what W. did while in office.  All democrats have to do is connect him to Bush.  And on top of that, point to Perry's long tenure as governor and the mess Texas is in now.

Get ready, Rick.  This is not going to be a walk in the park.
Posted by KeyRose at 2:07 PM