In yesterday's classifieds section of the LMT, a notice was posted of a public hearing to be held at 5:30 on September 6, 2011 at city council chambers.  The hearing will focus on the proposed 2011-2012 city budget.  The ad took up quite a bit of space so I divided it into two sections.  Here's the first: 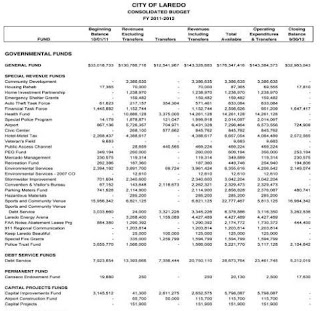 In the section above I was surprised by how much money goes into the Sports and Community Venue fund.  It generates more money than even the Hotel-Motel Tax item.  I'm not clear on how the city comes to have a ending sports venue balance of over $16 million.

Let's move on.  Here's the second part of the notice: 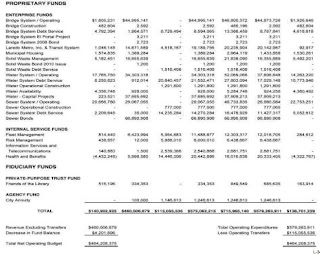 In this section my attention is focused on the Bridge System El Portal Project.  Money for that item is at $3,200.  What is that for?  Last year I wrote about how the Khaledi brothers were supposed to be paying the city $45,000 in monthly rent.  In doing some research, I found out that payments weren't necessarily made on time, but instead, the tenants caught up with their rent eventually, or so I was told.

When the Laredo Broncos were being forced out because of late payments (Veterans Field), nobody, except LareDOS, brought up the fact that the Laredo Bucks also weren't up to date on their rent.

That $3,200 amount most likely doesn't represent rent collected on the El Portal site, but I'm wondering why it's not even included in this notice.  From the first picture I can see that this is supposed to be a consolidated budget but I would really love some clarification on the sports venue, and El Portal items.