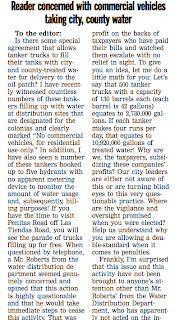 If things are just there for the taking, of course somebody is going to help themselves to them.


UPDATE:  At tonight's city council meeting, mention was made of the activity outlined in the letter to the editor (video link below).

The video clip I'm including in this post is of the Utilities Director, Mr. Tomas Rodriguez, suggesting to city council that the water conservation plan be put back into effect.  As soon as he does that, the city manager emphasizes that it would only be on a temporary basis.

I really don't know why city council would do away with water restrictions at all (watering on designated days depending on your address number), especially when we've gotten such little rain.  But apparently we haven't had any restrictions since last year.  For the city manager to suggest that a re-implementation of water conservation be temporary is mind boggling.

People who are scraping by make it a point to watch their water use.  We may see people watering the street, but the ones who use the most water are the ones who have large, lush lawns.  The ones who use the most water have monthly water bills in the triple digits.  In suggesting temporary water conservations efforts, it seems that council, and the city manager, don't want to upset those with private sprinkler systems and luxurious yards.

In the video, Mr. Rodriguez notes that people are not aware that water restrictions had been lifted some time ago.