This is exactly the kind of headline I want to see when I decide to cross over into Nuevo Laredo.  But seriously, I had to go over to see a dentist because one of my wisdom teeth had a big cavity in it and it had been bothering me for a couple of weeks.  It was mostly a dull pain that was present at bedtime.  The dentist told me that the discomfort was due to lying in bed -- there was more blood flow to the head and that increased the pressure to the affected tooth.

Luckily the whole tooth extraction experience went on without a hitch.  And I can safely say that I'm looking forward to a restful night tonight, sans molar.  The dentist was really cool, so I'll probably visit him again for further dental care.

Anyway, when I was crossing bridge 1, I noticed that the river's water level looked depleted.  I was able to take a picture through the bridge's fencing.  Check it out. 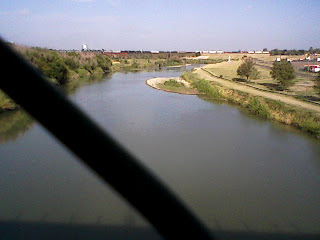 (The railroad bridge is off in the distance)
Correct me if I'm wrong, but I don't remember the half-circle piece of land (middle of pic) being so visible.  The banks of the river, on the American side, used to be very brushy; the foliage would probably cover up the area I'm speaking of.  But in crossing the bridge before, I can't recall that little peninsula looking so clearly outlined.

Mr. Rodriguez, the utilities director, suggested the watering schedule be put back into place because other municipalities were telling their citizens to conserve water.  Is that the real reason, or could it be that they are aware of our water scarcity?
Whatever the case, watch your water usage, people.

Back on the U.S. side, I got a chance to visit with my friends at the Farmers Market.  It's held every third Saturday of the month at Jarvis Plaza.  Here's a picture. 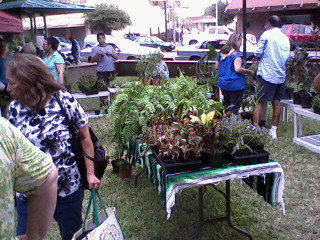 This is a shot of a vendor offering up some nice plants.  It looked like they made out pretty well, what with all the people that were browsing and asking questions.
I would've visited my friends from Caffe Dolce, but by having a cotton ball control the bleeding on my gums, I decided to forgo the baked goods.

All in all I'd say it was a very productive Saturday.