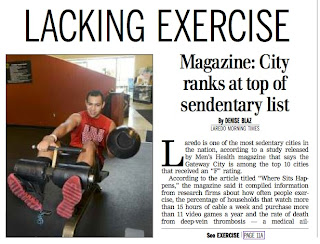 I try to get in as much activity as I can on a daily basis.  At work I'll get up and walk around the facility to log in as many steps as I can.  Then at home I'll go out for a jog or a bike ride.  But I've noticed that as I've gotten older, the energy level just isn't there, and joints start to act up when I overdo things.  Still I have to make an effort if I plan to run this year's Guajolote 10K Race.

LaredoTejas discusses local language usage:  the 'forf' of July.  I used to get a kick when friends would say 'libary' instead of library.  Why just yesterday I heard a newscaster say 'Roriguez' instead of Rodriguez.  That happens quite a bit.  I'm not going to say who it was but it isn't hard to find out for yourself.

Critters and Crayons put up the blue bag schedule.  I'll do my part to recycle.

Of course with this being a holiday, we have to have parade coverage.   QF.

Wake Up Laredo is gearing up for something new.

Tex[t]-Mex keeps up with local happenings from afar.

And Jobsanger never disappoints when it comes to political issues.  And I agree -- if we think we're a Christian nation, we should act like one.