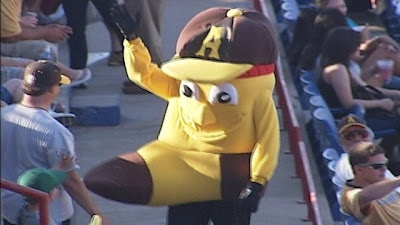 It's the 4th of July! Time to enjoy flags, apple pie, and baseball this day of indepence. It made me think of Laredo's new baseball park which is not open and the new mascot which will come.

To the north, the Amarillo Sox team had their own issue with its mascot, a giant yellow and brown sock.

The Sox mascot was supposed to look like a sock but looked nothing like General Manager Bob Lee had requested. Instead of a soft looking sock-type mascot from nearly head-to-toe, the foot portion of the sock stuck straight out about 2 feet at the waist.

According to the general manager that's not the way they wanted to go.

"It was not the way I wanted it," Lee said. "I'm very disappointed in the lady who did it, and I've told her so. She is going to fix it to the changes we want. I want to say on the record, if we offended anybody, I apologize."

Allrighty then. Apologies all around for the obscene mascot with the woody. Back to the drawing board!
Posted by KeyRose at 10:44 AM