Don't Get On Their Bad Side 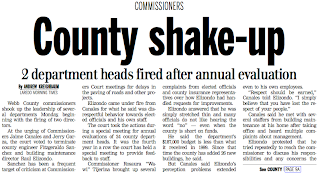 This is my favorite part of the article:

Elizondo protested that he tried repeatedly to reach the commissioner to discuss his responsibilities and any concerns the court had.  But Canales said he was waiting to see if Elizondo would take any corrective actions of his own accord.

I think Mr. Elizondo was trying to take corrective actions, Commissioner Canales.  The problem is: you never returned his calls (I'm inferring here)
I've never met Mr. Elizondo, but I get the impression that he's a truculent individual.  Again, I'm only going by what was written in the LMT story.  For not being a team player, he got the ax.  But for him to be let go when everybody is expecting a yearly evaluation is harsh.  The court, especially Canales, was determined to clean house.  No compromise was to be had on this day.

Canales said he met with several staffers from building maintenance at his home after taking office and heard multiple complaints about management.

OK, he was probably difficult, but no probation?  No written reprimand?  No reassignment?  Perhaps the LMT writer left out some details, like Elizondo's file being full of written complaints, or him being asked to take part in anger management classes.  Whatever the case, it seems like the lines of communication have totally broken down at county.  If you take anything from this, it's that you don't want to diss the court, because they can make life very difficult for you.