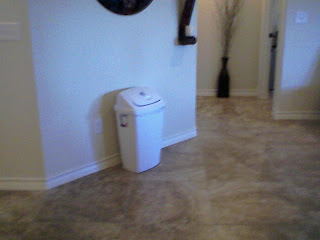 I spent most of the day checking out the homes on display for this year's "Parade of Homes."  I was hoping to get ideas for my patio, but it was only a handful of homes that had your typical outdoor grilling oven with a chimney, ceiling fans, and cushy furniture.  For the most part, the backyards had grass and nothing else.  I suppose the goal of this event is to present floor plans to people and not so much the landscaping.

All the homes were decked out with nice furniture, some of it tacky for my taste.  The homes were nice but builders, in some cases, got too adventurous with their designs that it took away from the overall look of the home.  In one case, a staff member tried to turn on a water feature, where water was supposed to stream down a glass divider between the entryway and the living room.  He pressed several buttons but nothing happened.  And I think that's one thing I took away from the showcase:  they try to impress you with fancy upgrades, but they end up falling flat.

Anyway, the picture I've included above is that of a home that had a plain plastic trash can near the living room.  Nobody was allowed to take food or drinks into the homes, and out of the ten or so homes we saw, water was offered to us at one site, so I don't know why they had the receptacle out in full display.  But I think it speaks to the significance of the experience.  Here you had all these expensive homes with a minimum of 2,000 sq. feet apiece, and in the middle of it all was this ordinary kitchen fixture.  It was out of its element somehow, just like most of the 'parade' attendees.

Now, I'll admit that those homes were out of my price range.  I make a good living, but I'm not about to go out and buy a $300,000 home.  There's too much upkeep to worry about and I would definitely have to get a second job.  It would be nice to live in one of those homes if I wasn't so much of a Joe Lunchpail type of guy.

I felt like that little trash can -- out of place.  That's probably why I live in the Chacon.  But I got the sense that most of the people who were out to see the homes were also in a league not their own.  I can safely say that the house that had six bathrooms was not in anybody's price range.  Nevertheless we all went in out of curiosity.  That, mostly, was what got us out of bed this morning.